Sorry for the delay in updating this … 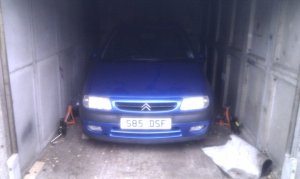 Saxo safe in the garage

So with the Saxo in the garage, it was time to start work getting it ready to be used and abused. I wanted to go over everything to make sure it was ok, replaced where needed, and tarted up if it looked scruffy.

As the car was ‘nose out’ in the garage it made sense to start with the front suspension, which after some drilling, drilling and a little more drilling, was soon off. 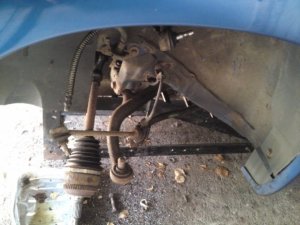 Then to take them home, strip down, paint and swap the springs to standard VTS versions.

I also took the Anti-Roll bar off the front whilst I was on, again, the plan was to clean up, paint and replace the mount bushes.

Once all the planed cleaning and painting was done, it was time to rebuild the struts with standard height VTS springs, I wanted to return the car to standard height so I could a) have a reference point for all suspension changes, and b) make sure the car was lowered evenly and correctly in the first place. It was also a good excuse to dismantle all the suspension components, front and back.

and back on the car

I also replace the drop links and tie rods when putting the struts back on the car.

and so it begins …

So for a long time I’ve wanted a project car, either to be built for a purpose, or for a bit of a laugh but with a finished project I could drive. The thing was, I didn’t want to pay much, and I didn’t want a wreck. A post was seen on Facebook by an old forum buddy of Saxo Sports Club, Neil Wood, who had a Saxo VTS in his garage that he was thinking of scrapping, all he wanted for it was the scrap value £150!

I went over to look at it, and it was stuck in the garage, it turns out Neil had bought the car 4 years prior to me purchasing it from him as a project car too, but when he got it home, the gearbox let go, so it got put in the garage till he had time to sort it out. Four years later, the brakes had seized on, the battery was flat, and so were the tyres, there was no way we could push the car out. A quick look round, under the bonnet and in the boot, and I’d decided that it fitted the bill perfectly, and that threw up a few further issues.

We live on a sloped drive, so parking a car on there was a no no, our garage was full of bikes, tools and other associated ‘garage clutter’ so that was ruled out. Hmm. A friend from work mentioned that the local council offered empty garages for a nominal fee per fortnight, so I gave them a call, they had a garage local, excellent!

Problem two, the car had no tax, MOT or insurance, I didn’t have a trailer, and didn’t have a clue how I was going to get the car home … After asking around, it looked like I was going to have to hire a car transport trailer from a local hire company, when Garry at work heard about the dilemma and said a friend of his had a couple of car trailers he lent out, so I gave John of www.vindicator.co.uk a bell and he said we could borrow the trailer for the day, and he had some ratchet straps to fix the car to the trailer. Result!

A bit of discussion between dad and Neil, and we had arranged a mutually agreed date for collection of the Saxo. We picked the trailer up on a Saturday morning, drove to Stafford, and met up with Neil. Now, the Saxo remember is stuck in the garage, and the three of us couldn’t push it out, thankfully, Dad was able to pull it out using his car, and with a puff of dust the brake pads released their grip of the brake disks and the Saxo saw daylight for over 4 years! Now, we thought it would be a simple case of push the now free running car on to the trailer, strap it down, and make our way home … nope, the tyres were still flat making it difficult to push, I’d pre-thought this and had my foot pump in the car, so we put some air in the tyres, and tried again to push the Saxo on to the trailer, we got it half way up on the ramp (I say we, I was sat in the car steering (being the lightest) whilst Neil and Dad pushed like mad) no joy, so we rolled it back as far as possible, and tried again, a little further on the trailer, but not quite there.

Then Dad, in a moment of genius said he could pull the car on to the trailer with his car, we dropped the jockey wheel, choked the wheels and put a jack under the back end to stop the trailer tipping up, and … bingo! the Saxo was on the trailer, but I couldn’t get out! The Saxo had stopped on the trailer with the doors perfectly placed to hit the mud guard of the trailer, so I had to climb out the boot! We strapped the car down, swapped papers with money, and the Saxo was mine, and so we left with a pretty clean example of an S reg Saxo VTS bound for Kidderminster.

We got the car home, and gave it a quick wash before dropping it up to my newly acquired garage.

Outside home after a quick wash

from the other side

Then all that was left was to get the car off the trailer, which we struggled with initially, then drop the trailer back to John, in all, this took us all day!

Hello, and welcome to my wordpress blog. Following the build of my Saxo VTS from road car, to track toy, and hopefully ending up as a full blown stage rally car.

Please feel free to contact me to offer advise, or just comment on the site. I’m not a perfectionist, so any errors or omissions will be gratefully pointed out to me.